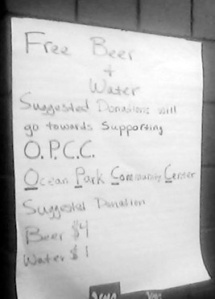 By Greta Cobar
“Venice is changing” has become an often-heard statement around town these days. Like a plague spreading around town, the infestation of gentrification is now trying to overcome Lincoln Blvd.
And if you want to be cool and fit in with that crowd, call it the Linc. It’s the hipster-thing-to-do.
On June 22 the Venice Music Crawl made its debut on Lincoln, with locations including Deus Ex Machina, RG Club, Floyd’s Barber Shop, Venice Love Shack, Witzend and the Talking Stick.
Some parts of the event were fun and ran smoothly. For example, the crowd at the Talking Stick was bigger than usual and local talent was on display.
“If they’re gonna give away free beer, they shouldn’t arrest homeless people with empty containers,” David Busch said of the youngsters walking down Lincoln with beer in their hands.
Free beer was given out in the empty industrial space near Floyd’s, on Lincoln and Sunset. There was a sign stating that all proceeds will go to Ocean Park Community Center (OPCC) and suggested a donation of $4.
Knowing that OPCC runs anti-substance abuse classes and programs, it seemed unusual for beer to be sold on its behalf. Michael Pegues, speaking on behalf of OPCC, told the Beachhead that although OPCC agreed to accept proceeds from the event, they were not present at the event and were not aware that beer was used to raise money for their organization. According to him, OPCC thought that money was going to be raised by providing haircuts at Floyd’s.
Although with a different vibe, that’s how First Fridays started on Abbot Kinney: with the free wine and live music. It attracted the locals. There were some great parties and stories to be told – or forgotten. Before we knew it, the out-of-towners found out and started pouring in. The wine was all of a sudden gone and music was no longer allowed. The locals soon bailed out on the insanity that First Fridays became, but the out-of-towners continued to come – and the more they came, the higher the real estate went.
Store rent prices on Abbot Kinney jumped up several hundred percent as a result of attracting well-to- do people who were presented with a store-front cool Version of what Venice really is not.
It will be interesting to see how the real estate moguls will use free alcohol and music to drive up real estate prices on Lincoln.
The Music Crawl’s initial mission statement mentioned bringing the wave of gentrification from Abbot Kinney and Rose onto Lincoln. It was partly deleted and modified following the date of the event.