by Delores Hanney
Research by Samara Jacobs
It was ghastly! Young race guy around town, Hal Shain, was zooming along with an alarming absence of due diligence, even by daredevil standards. As he drove too close to the top of the cup-shaped track – known as the Dare Devil Race for Life – his 2500-pound Haynes automobile smacked into a post and reared backward. It threw Shain down 20-feet to the cup’s bottom, falling on top of him, leaving him horribly mangled.
But it took two hours for him to die.
Three members of the audience that had been keenly watching the spectacle from a spot on the observation platform at the crown of the track were injured by flying bits of rubble from the shattered post. Like Shain, they were taken to St. Catherine’s Hospital, prizefighter Luther McCarthy gallantly stepping forward to assist with the transpo.
This was back in those times when Venice was virtually amusement zone central on the West Coast, famed far and near for its breath-sucking attractions and other crowd-pleasing enjoyments. Entertainment mogul, Tom Prior, had arrived from Chicago in 1911 – where he was the promotional kahuna for Chi-Town’s two big amusement sectors, White City and Riverview Park. His first project in Venice was the ginormous Race Through the Clouds rollercoaster erected alongside the now long-gone lagoon. Built on Windward Avenue across from the St. Marks Hotel, Dare Devil Race for Life was his second.
A small-scale motordrome, only 80-feet in diameter, the wooden track of it angled upward at a 72-degree angle; a red danger line a foot from the top urgently warned, “go no higher!” The attraction wasn’t exactly a race, per se, but rather an exhibition of very fast driving six times a day. Still, Hal Shain set several speed records that year as he tore around the track he had all to himself. The Race for Life was a big draw with the public but its original driver hadn’t fared so well either. Only two days after taking up the high-velocity employment he was mooshed when the crane lifting his car out of the cup-shaped arena dropped the vehicle on top of him. Though he wasn’t killed, he was badly hurt and never again returned to racing.
Venice was then at the front end of its lust for hosting racing events that would come to include, in just the next few years, the Junior Vanderbilt Cup Races of 1914, a Grand Prix race and the Grand Prize International Motorcycle Race in 1915. The Dare Devil Race for Life might – with a little stretch – be considered the birth of the trend.
In the days prior to Shain’s death, it was noticed he was driving even more wildly than usual, a factoid that apparently aroused no more interest than a sneeze. On the fateful day of his death, he seemed almost suicidally resolved to propel his car to the very upper edge of the track. Alas, for inquiring minds that want to know, there was no psychological autopsy, no tidying up with an explanation for his especially heedless driving that Saturday afternoon and in the days before. Had he just learned he had a terminal disease process cooking away inside his 28-year old self? Did he have gambling debts that a throng of no-nonsense thugs was out to violently collect on or punish? Had his wife run off with an itinerant tinker taking Shain’s seven-year-old son along with them? Or had a foolish sense of invincibility simply disabled the caution button in his brain?
The coroner ascribed Shain’s cause of death to his own utter carelessness: a thrill junkie’s overdose, one might say. The Daily Outlook of Santa Monica purveyed a different opinion holding, instead, that a bloodthirsty hunger for daredevil antics was the problem. Right there in its December 30, 1912 issue it unequivocally laid the blame slap dab on the consumers of such life-threatening displays. “The public puts a premium on dare devil feats by patronizing them and the public really has most of the responsibility,” the newspaper maintained.
Scads of guys were all hot to fill the vacancy left by Shain’s death but management chose his former mechanic, Bert Hall, for the job, giving orders for him to drive no more than half way up the track. The minor damage visited on the facility by Shain’s rash jockeying of his car was quickly fixed allowing the hyper adrenalin-feed in both driver and spectators to resume just five days after it ceased. 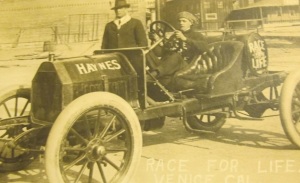 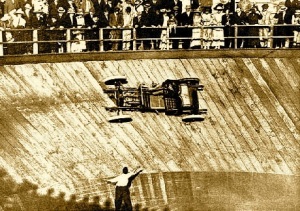