By Michael Riley
Although I was born in Long Beach, I never went to Venice until I was in my twenties. The thing that brought me there was my love of music, in particular the 12 string guitar.
My friend and compatriot, Chuck Moore had just introduced me to a couple of recordings: The 12 String Guitar, and Songs My Mother Never Sang, both featuring guitarist and folksinger Fred Gerlach. (Who would forever be referred to in the familiar “Fred”.) Chuck would bring me along to see all the folksingers that played around town in the day. Back then folk music was harder to find.  You literally had to know someone. So, when I was ready to purchase my first 12 string, Chuck says ” Let’s go see Fred.”
At that time I had no I idea that Chuck and Fred were that close. Fred was a Folk Music icon. He had lived with Leadbelly during the birth of the Folk Revolution. In the 50’s Leadbelly had a New York apartment where musicians from all over came to meet. Pete Seeger, Sonny Terry, Brownie MgGee, Cisco Houston, Woody Guthrie – Bob Dylan was also a kid in the corner.
Fred’s reputation as a guitar maker was well known. He made 12 string guitars for Pete Seeger, Leo Kottke, Dick Rosmini and others. Once when he was in San Diego He walked into a Music Store and saw a guitar he had made on the wall with a $10,000 price. When he asked why it was so expensive, the owner said “This is an original Gerlach! He’s dead.” Fred said “Oh!” and left.
He also went to England to play a command performance for the Queen, as well as teach slide guitar to a young Ry Cooder. The next day I would meet the man himself!
Chuck took me up to a little house on Glyndon St. and I met my hero. He was a nice, but gruff man who was generous with his time and knowledge. I learned so much about wood, guitars, woodworking, airplanes (He was building a wooden one – in the attic!), ivory,glue and glue joints, structural points… in one afternoon – my hungry mind was filled with knowledge I still depend on… 44 years later.
Eventually Fred said he had an old 12 string that I could have pretty cheap. It was huge. Bigger than any J-200. It had a fancy hexagonal sound hole, a super wide fingerboard, and it was tuned down whole-step to D.  It had a 5 piece “Cathedral” design back. It had a beautiful 7 piece indestructible neck. A slotted peghead. It had the biggest, most piano like sound of any guitar I knew.
Chuck and I built a very heavy case to carry it in. It was shaped like a coffin. I didn’t care – I eventually took it into The Ash Grove and met Reverend Gary Davis, who swapped guitars with me for a tune in the green room.  Like all 12 strings it eventually fell apart, except for the indestructible neck, which still adorns a dilapidated dory used as a garden bed.
A few years later I was living on Palm Street, in Venice, and came to Fred when I needed a six string guitar.  It was 1972. He let me choose the wood from his private stash and built me the guitar that I still play today. A deep drednaught that is still the best sounding guitar around, as far as I am concerned.
Thank you, Fred Gerlach for enriching my life and the lives of countless folkies. 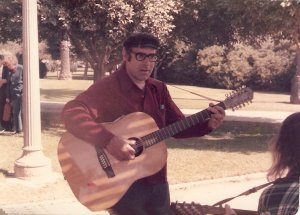