By Mary Getlein
The Guantanamo Bay Detention Center in Cuba needs to be closed, now. Obama promised to close it when he was running for office in 2010. After he was elected, the issue disappeared from his agenda. Guantanamo has been in place for 11 years and has been a center of human rights violations since day one.
Prisoners are held without criminal charges or rights to trials, which is a human rights violation. The United States criticizes other countries for the same thing (i.e.: Iran, China, Turkey, etc.) and refuse to admit the illegal practices that are going on in Guantanamo Bay.
Most prisoners have been imprisoned with no legal charges. They were arrested and taken from their homes to jail after 9/11, and were charged with being “terrorists”. People were arrested from the Middle East, Africa and Southeast Asia for arrest and interrogation. Prisoners have been tortured in many ways, including indefinite detention, solitary confinement, physical violence and psychological abuse.
Many prisoners were turned in by neighbors for huge bounties of $2,000 to $5,000 for lying about their neighbors and calling them traitors or terrorists. 92% of the prisoners were not connected to Al-Qaeda or The Taliban. 7 prisoners have been convicted by military courts at Guantanamo Bay.
The total number of prisoners has been 779 and 166 remain. The Obama administration plans to hold 46 of the detainees indefinitely and has done nothing to discharge 86 men who have been cleared of all charges in 2010.
Guantanamo has been charged with the crime of torture. The horrible photographs of this practice were released years ago and everyone was duly horrified at this practice. Then somehow, the horror went away. The reality of Guantanamo torture is still going on. Examples of this are sleep deprivation, chaining people in stress positions, exposure to very cold temperatures and sexual humiliation. Torture creates mental and emotional effects to both the victim and the torturers. Information gained by this practice is unreliable, as people will say anything to get the pain to stop.
Hunger strikes have begun in 2013. So far, 100 detainees have joined the hunger strike. The military personnel have started force-feeding one-fourth of the prison’s population. This is a brutal practice of strapping people down into chairs and pushing large tubes through the nose, down the throat and into the stomach. Prisoners have reported the military personnel using the same tubes for multiple prisoners without cleaning off the blood.
In response to this, in July 2013, prisoners at California Pelican Bay State Prison called for a nation-wide hunger strike to protest torture conditions inside U.S. prisons.
Closegitmo.net aims to end all U.S. sanctioned torture. President Obama promised six years ago to shut down Guantanamo, and had agreed it was a threat to national security. The existence of Guantanamo is a human rights violation and a stain on the image of the United States. President Obama has not come any closer to shutting it down.
If you don’t really care about this issue, thinking that is has nothing to do with you, just remember that this is how human rights are taken away. If no one protests this, it will keep on happening.
The World Medical Association and the United Nations view force-feeding hunger strikers as torture. This operation costs U.S. taxpayers  $2.74 million per detainee, compared to $78,000 per inmate at the U.S.’s most secure prison.
To get involved and find out more, go to www.closeGitmo.net
References available at www.metapeaceteam.org 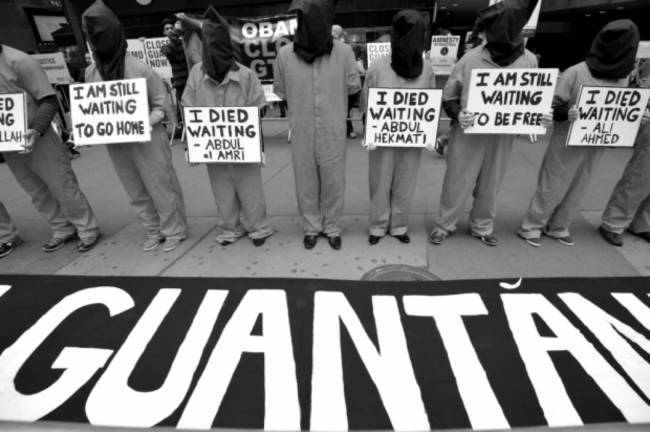