By Greta Cobar
Without providing any parking in an area that is already congested, some out-of-towners are planning on opening an 80-seat restaurant in place of Kim’s market at 600 Mildred. The proposed restaurant is planned to stay open 7am to midnight. The owners already have a restaurant in New Mexico, and plan to open one in Venice.
The law requires the owners of the business to notify residents within a 500ft radius, but residents only within a 100ft radius were notified. The owners have also been trying to circumvent LUPC and VNC by scheduling the public hearing with the City first. An informal, poorly organized and publicized community meeting took place just outside of Kim’s market hosted by the new owners on April 29. About 40 angry neighbors came out to speak against the proposed restaurant.
The restaurant would involve remodeling, with 32 our of the 80 seats being on a patio area. Windows might be planned for the wall where currently the beautiful Venice mural is, and the owners would have the right to destroy the mural – as long as notice is given to the artist. The public hearing for this project is scheduled for May 22 at 10am, at the West L.A. Municipal Building, Second Floor Hearing Room, 1645 Corinth Ave.
“I love it here, but I have to move. I’ll probably have to leave in about a year, and I probably won’t be able to stay in Venice,” Kim said. He’s been operating the neighborhood store for eleven years now. 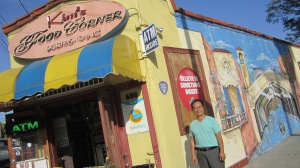 Above: Abraham Kim in front of his market