By Clay Claiborne
Sunday, June 29th, the LAPD introduced a new tactic designed to clear what they consider “undesirable” people from the Venice Boardwalk,
As has become almost a Sunday summer tradition, the Doors tribute band “Peace Frog” was playing at the Venice Bistro. The club has an open front and many find the music sounds best outside the club, so as has also become a tradition, several dozen people who either couldn’t afford the cover charge, didn’t want to drink, or simply wished to remain outside, had gathered in front of the Bistro to listen and dance.
I was also there as usual when four LAPD cars entered the boardwalk from Rose Ave about 8:30pm and did something I have never seen them do in many years living in Venice and listening to bands at the Bistro. They drove two abreast very slowly down the boardwalk all lit up like Christmas trees. Their lights were flashing like they were rushing to an emergency but it was clear they were going nowhere slow. They were clearly intend on forcing people to move from in front of the Bistro so I approached one of the lead cars to ask what the ruckus was about. I spoke briefly to the lead officer, Sgt. Y. Moreau [badge #26116] who told me that they had just broken up the drum circle [down by Brooks Ave] and some of the people had come down here so they were clearing them out of here as well.
From their lights down on the beach, I had seen them break up the drum circle but I saw no influx of people from that joining us in front of the Bistro. In any case, in the hour before the arrival of this police task force, I had observed no drinking outside, no fights, no disruptive behavior at all, certainly nothing requiring police intervention; and neither did they, because they never got out of their cars. In spite of Sqt. Y. Moreau’s attempts to connect this action to shutting down the drum circle, it was clear that it was directed at everyone in front of the Bistro and while the business owners might like to see the LAPD stop people from enjoying a free concert, there were no public safety issues that warranted this sweep. Harassing people into either paying the Bistro or going home is not a proper use of police powers or resources. 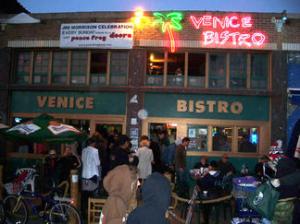