By Marty Liboff
Let us go back, back before Venice even existed. Abbot Kinney and a few of his business partners as early as 1895, had developed parts of the northern borders of what is now Venice and south Santa Monica. This area was called Ocean Park, and they built houses, gambling casinos and a pier. Kinney had a falling out with his partners and they flipped a coin to see who would stay and who would go. Abbot Kinney lost the toss and he moved his dreams a little ways south. His dreams later transformed into a fantastic Venice of America with his own pier and a complete recreation of Venice Italy with canals and classical Italian style buildings. It opened in 1905.
Back in Ocean Park, the old pier went through several incarnations. Finally in 1958, a giant amusement pier called Pacific Ocean Park opened. The pier began in Venice at Navy street and continued north for several blocks. It was one of the largest piers ever made. It was several times the size of the Santa Monica pier! The border of Venice and Ocean Park, or Santa Monica, is now about 50 feet north of Navy street. The border was set when Ocean Park was incorporated into Santa Monica, and Venice became part of L.A.
When I was a punk teenager, I worked at P.O.P., or Pacific Ocean Park. Recently I helped with a new book that just came out called; ‘Pacific Ocean Park-The Rise and Fall of Los Angeles’ Space-Age Nautical Pleasure Pier’ by Christopher Merritt and Domenic Priore. For a couple of years this amusement pier actually had as many people attending as Disneyland! It was a wonderful, ocean themed Disneyland with all sorts of wild rides. The entrance was one of the wonders of our modern world. It had 60 foot pillar arms supporting giant bubbles and rotating sea horses. One of the badly damaged old seahorses is on display at the Santa Monica Museum. Everyone who went to P.O.P. will love this book. Even if you never went there, the colorful photos of the crazy rides will leave you amazed. The book starts out with a great history from Abbot Kinney to the final end of the pier.
Our own father of Venice art, Earl Newman, had done a series of posters of P.O.P. (right). Some are in this book. He has them available again in new digital prints because of this book coming out at; earlnewmanprints.com. Many years ago, Earl had his old art studio on the Ocean Front where Small World Books is now. He is one of the original Venice “Beat” artists.
On the Venice side of the pier, sometimes called the Lick pier, was a lovely old ballroom. It was called the Aragon Ballroom and the last couple of years it was called the Cheetah Club. All the great bands played there. I’ll tell you about it next month!
In 1975 the P.O.P. pier was torn down. Now, when you walk north from the Venice border, there is no sign that one of the biggest and most wonderful amusement piers of all time was there. There is only the shifting sands of time covering over the site, and our memories…
P.O.P.
P.O.P. by the sea
Fun for you & me.
Roller coasters & a Ferris wheel
Pay one price is such a deal !
Riding bubbles high over the Pacific
The Sea Circus was terrific !
A banana train & bumper cars
A diving bell & Flight to Mars !
Scary Davy Jones fun house
A fast Flying Fish mouse.
Cotton candy & a merry-go-round
Famous movie stars all around.
Neptune’s Kingdom and a Magic Carpet Ride
Hugging your honey by your side.
The greatest pier of all time
Now it only exists in my rhyme…
– Marty Liboff, 2014 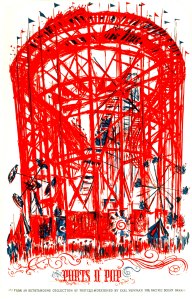 Above: Earl Newman poster of P.O.P. – this and seven others now available again
More info: earlnewmanprints.com

0Shares
Previous PostPanagiotis Douvos is the Pano we all LoveNext PostRuss Baker: from Venice High School to Award-Winning Investigative Journalist